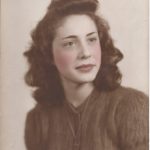 Adeline R. Vullo, 96, formerly of River St., South Scranton, passed away Friday at the Jewish Home of Eastern PA. She was the widow of Philip T. Vullo, who died May 5, 1981. Born in Scranton, she was the daughter of the late Ubaldo and Vincenza DeStefano. A graduate of Scranton Technical High School, Adeline worked for the former Globe Store in the better dress department and after the Globe’s closing worked for Boscov’s in the fine apparel department for women till the time she became ill. Adeline was a member of the Church of the Nativity at St. John Neumann Parish. She is survived by one son, Philip Vullo and wife Debbie, one daughter, Gloria Martin and husband, David, five grandchildren, Danae Martin, Philip and wife Kara, Jamie Vullo, Kimberly Vullo and husband Paul Benson, Tamara Vullo, five great grandchildren, Dominic, Isabella Adeline, Lucas, Gabriel and Scarlet Vullo, two sisters, Louise Gill, Edythe Massaro, nieces and nephews. She was also preceded in death by brothers, James and Leonard DeStefano and one sister, Josephine Hanis.

A Mass of Christian Burial will be celebrated on Wednesday at 9:30 am at Church of the Nativity at St. John Neumann Parish, by the Rev. Michael Bryant, Pastor. Entombment will follow at Cathedral Cemetery Mausoleum. There are no calling hours. Those attending the Mass are asked to be at St. John Neumann Parish, 633 Orchard St, Scranton, PA 18505 for 9:30. Adeline’s family would like to acknowledge and thank the nurses and staff of the Jewish Home and Hospice of the Sacred Heart for the excellent care and compassion given to their Mom. Arrangements by the Edward J. Chomko Funeral Home & Cremation Services, West Scranton.