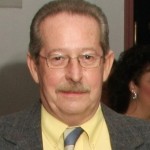 Alexander G. “Al” Bouton, 67, of Tripp Park, died peacefully Thursday evening at home, after a long battle with cancer, surrounded by his loving family. His wife of 46 years is Christine Hill Bouton. Born in Scranton, he was the son of the late George and Rhea DeHaven Bouton. A 1965 graduate of Scranton Technical High School, he was a Viet Nam era Army veteran having served in Germany with the 2nd BTN, 37th Artillery. After the Army, Al began his career of 43 years with the MacTac Company as a coater operator and with the fire safety team, up until his illness. Al was a loving husband, father, brother and grandpa who was an avid car buff (motor head) attending car shows, spending quality time with his family and friends. He also spent his reserved time, working on his 1955 Chevy. Along with his wife Chris, he is survived by two sons, Brian Bouton and wife Stacey, Todd Bouton and Cynthia McGuire, all of Scranton, four grandchildren, Brandon, Conor, Ashley and Beyonce. Two brothers, Bruce Bouton and wife Joan, Scranton, David Carr, Mass., three sisters, Sue and Tim Rath, MD, Sherry Starzec and Al, Duryea, Mary Ann Roberts, Indiana, nieces, nephews and cousins. He was also preceded in death by a daughter, Tammy Bouton. Al’s family would like to acknowledge and thank the doctors, nurses and the Hospice of the Sacred Heart for their compassionate care given to Al and his family His funeral will be on Tuesday, beginning at 9:15 from the Edward J. Chomko Funeral Home & Cremation Services, 262 Railroad Avenue, West Scranton, with Mass of Christian Burial to be celebrated at 10 am in St. Ann’s Basilica by the Rev. Francis Landry, C.P., Pastor. Interment with Military Honors will follow in Dunmore Cemetery. Viewing for family and friends will be on Monday, 4 to 8 pm.