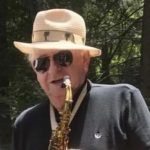 Inurnment will be private. There will be no calling hours.

Arthur R. Stanton, 81, of Scott Twp, passed away on June 25, 2022 at Allied Skilled Nursing after a lengthy illness. He was the widow of Christine Bellucci Stanton, who passed away in 2019.

Born in Dunmore, he was the son of the late Floyd and Romayne Stanton. He was preceded in death by a brother, Jack and a sister, Beverly. He was a graduate of Dunmore High School.

Before retirement, he was employed by Gutheinz Meats for 42 years. An avid musician, he played with several local bands and taught music at the Gallucci & Gianetta Music Studios. Active with the Masonic Organization, he was a 32 Degree Mason and a Past Master of Peter Williamson Lodge #323. He also enjoyed playing in the Irem Temple Band.

He is survived by 4 children and 7 grandchildren. His family expresses their deepest gratitude to the caretakers at Allied Services.

Inurnment will be private. There will be no calling hours.

Arrangements are under the care of the Edward J. Chomko Funeral Home and Cremation Services, 262 Railroad Avenue, West Scranton.