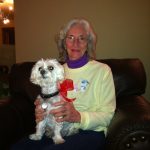 Home of Eastern Pennsylvania located in Scranton. Born in Heiberger, Alabama, she was

the loving wife of the late Donald J. Ferraro. Joyce was raised in Perry County, Alabama, and

graduated from Suttle High School in 1957. She married the love of her life Donald who was

stationed at Craig Air Force Base in Selma Alabama where they met. Together, they lived in

Marion, Alabama in 1989. Joyce was preceded in death by her husband Donald, her mother

great-grandchildren, Trinity and Nova. She is also survived by her sisters in Marion, AL; Bettye

Ann, Bessie Jo, Irma Jean, and her cousin Evelyn whom she considered a sister.

Pennsylvania in Scranton as well as those at Oakwood Terrace Memory Care Center in Moosic,

Pa. for the years of love and support along with quality care they gave our mom.

In light of the funeral restrictions due to COVID-19, services will be private at Saint Wilfred’s

Arrangements are entrusted to Edward Chomko Funeral Home in West Scranton, PA and the Kirk