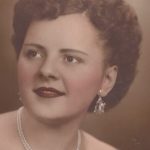 Catherine Ochwat, 84, of West Scranton, passed away Monday afternoon at home. Her husband of 40 years, the late Michael Ochwat died on August 22, 1998. Born in Scranton, she was the daughter of the late John and Kune` Kunda Serbin. Educated in Scranton Schools, she had worked as a roller in the cigar manufacturing industry up until she became a homemaker. Catherine was a former member of St. Mary of Czestochowa Church, Greenwood.  She was a loving wife, mother, grandma, sister and friend, who dedicated her life to giving her family a loving and stable home. She was an excellent cook, homemaker and always had a shoulder to lean on for those in need. She is survived by three sons, Gary and wife Sandra, Roaring Brook Twp., Ronald, Taylor, Mark, at home, one granddaughter, Ashley, one sister, Anna Pawlikowski, nieces & nephews. She was also preceded in death by four brothers, Michael, George, Stephen and Stanley, four sisters, Sophie Grudetski, Mary Chickey, Helen Foster and Carol Oleski. There are no public calling hours. Interment will be in St. Mary of Czestochowa Cemetery, Greenwood. Arrangements under the direction and care of the Edward J. Chomko Funeral Home & Cremation Services, 262 Railroad Avenue, West Scranton.