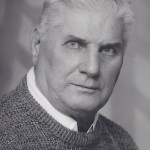 Charles (Charley King) Kreglewicz, 93, formerly of South Scranton, passed away Wednesday in Moses-Taylor Hospital. His wife of 47 years, Elizabeth “Betty” Wieckowski Kreglewicz, passed away in 1994. Born in Scranton, he was the son of the late Vincent and Mary Kaczynski Kreglewicz. Charley was a WW II Army hero who served in the African and European Theatre of operations. He was awarded the EANE with 3 bronze battle stars, Purple Heart, American Theatre, Victory, Good Conduct Medals and the Combat Infantryman Badge. Despite being forced to perform with a leg brace as a result of a shrapnel burst wound suffered in Germany during the last several months of the War, Charley was a standout athlete in seven sports, baseball, softball, golf, handball, volleyball, tennis and bowling. His pitching prowess attracted major league scouts from the Boston Red Sox. He was to sign a playing contract, but the war called and his later war injuries, kept him from entering the major leagues. Charley was inducted into the Northeast Chapter of the Pennsylvania Sports Hall of Fame in 1992 and the Chic Feldman Scranton Area Sports Hall of Fame in 1994. After recovering from his war injuries, he worked for Capitol Records for 26 years. When the plant closed, he began working as a Deputy Sheriff for Lackawanna County, for 18 years. He was also a security guard at the private boxes for the former Red Barons for 19 years. Surviving is his son Charles and his life partner Samuel Clark, who was like a second son to Charley. Also surviving are brothers inlaw and sister inlaw, Florence Kreglewicz, Florence and Thomas Lapinski, Elizabeth and Joseph Wieckowski and Susan and Jack Kosloski, along with nieces and nephews. He was preceded in death by 10 siblings, John, Chester, Joseph, Leo, Henry, Wanda Mazur, Jean (Sister M. Illuminata, C.S.F.N.), Ceil Munko, Martha Janosko and Mary Sovinsky. A Memorial Mass of Christian Burial will be celebrated Friday at 10:30 am, by the Rev. Fr. Scott P. Sterowski, Pastor, in Sacred Hearts of Jesus and Mary Church at St. Paul of the Cross Parish, 1217, Prospect Avenue, South Scranton. Inurnment will follow in the parish cemetery with Military Honors. Arrangements by the Edward J. Chomko Funeral Home & Cremation Services, West Scranton.