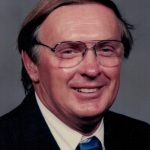 Viewing for family and friends will be Friday, 4 to 7 pm.

A Funeral Mass will be held on Saturday in St. Stanislaus Cathedral Polish National Catholic Church, 529 East Locust Street, Scranton, at 10 am to be celebrated by Prime Bishop Anthony Mikovsky.

Chester Edward Nezelkewicz, 83, Minooka section of Scranton, passed Sunday morning at Mountain View Care Center. He was predeceased by his wife, Sharon Nezelkewicz, after which he raised their daughters as a single parent. Born in Scranton, he was the son of the late Chester and Mary Nezelkewicz. Chester was a 1955 graduate of Scranton Technical High School, was a lifelong member of St. Stanislaus Polish National Catholic Church, and served in the United States Army during the Cold War. Chester was a Scranton Firefighter for 26 years, from September 1963 to April 1989 and later worked in the corrections field until his full retirement. He was an athlete and an avid sports fan, competing in 50 consecutive years of YMS of R track meets and attending Scranton High sporting events. Chester swam 150 laps every day at home or at the YMCA and competed in the Keystone State Games in the shot put, discus and javelin of which he was medaled. He also was also the co-captain of the Scranton Tech Track and Field team. He loved his family and was extremely proud of his daughters and grandchildren. He is survived by two daughters; Valerie Nezelkewicz, Scranton, Christine Noto and Dr. James Noto, Dallas, one stepdaughter; Chelsea Grow, Mississippi, two grandchildren; Chester James Noto and Summer Louise Noto, three sisters; Marie Williams and husband Ray, Moscow, Romayne Kardos, Old Forge, Arlene Latta, Ohio, one brother; Norman Nezelkewicz, Indiana, nieces, nephews and cousins. A Funeral Mass will be held on Saturday in St. Stanislaus Cathedral Polish National Catholic Church, 529 East Locust Street, Scranton, at 10 am to be celebrated by Prime Bishop Anthony Mikovsky. Interment with Military Honors will follow in St. Stanislaus PNC Cemetery, Kane Street, Scranton. Viewing for family and friends will be in the Edward J. Chomko Funeral Home & Cremation Services, 262 Railroad Avenue, West Scranton, Friday, 4 to 7 pm.