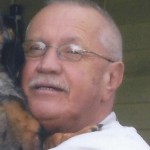 Chester M. Kozlowski Jr., 69, of the East Mountain section of Scranton died Thursday at Geisinger Wyoming Valley surrounded by his loving family. His wife is Laura Kasenchak Kozlowski. Born in Scranton, he was the son of the late Chester and Florence Zamushinski Kozlowski. Educated in Scranton schools, he was a Marine Corps Sergeant serving in the 26th Marine Regiment in Vietnam and retired from the Marines because of wounds received. He was employed as a mail handler at the Stafford Avenue Postal facility until his illness. Chester received the Purple Heart, the National Defense Service, Vietnam Service, Vietnam Campaign and Good Conduct Medals. Chet was a great dog lover and especially his dogs, Biscuit who passed away recently and Sundae who he leaves behind. They were the loves of his life. He is also survived by two sons, Anthony Kozlowski, Moosic, Joseph Kozlowski and wife Sharon, Laflin, two daughters, Shari Kozlowski, Old Forge, Janelle Kozlowski, at home, his sister Karen Loss and husband Paul, Scranton, his brother Danny Kozlowski and wife Romayne, Scranton, mother inlaw, Rosemary Kasenchak and sister inlaw, Mary Beth Kasenchak, both of Plymouth, four grandchildren, nieces, nephews and cousins. He was also preceded in death by his brother Gary Kozlowski and infant son Michael. Chet’s family would like to thank the doctors, nurses and staff at Geisinger Wyoming Valley for the care given to Chester. As per Chester’s wishes, there will be no calling hours. A private Military Honors Service by the Marine Corps will be held. Inurnment will be private. Arrangements by the Edward J. Chomko Funeral Home & Cremation Services, West Scranton.