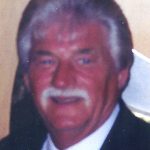 David W. Martin, 75, of Taylor, died on Sunday, at Hospice of the Sacred Heart, Dunmore. His wife of 48 years is Gloria Vullo Martin. Born in Edwardsville, he was the son of the late David J. and Melvera Martin. Dave was a 1960 graduate of Dickson City High School, attended the University of Scranton, began his career with Insalaco’s Super Markets, for 27 years and was the supervisor of all the Insalaco stores at the time of their closing. He then worked for Schiels Supermarket and also Northeast Transit until his disability. Also surviving is his daughter, Danae Martin, Taylor, who was the love of his life and whom he lived for, nieces, nephews and cousins. He was predeceased by two sisters, Alice Cosmar, Marlene Dietz, who passed on June 18th, and his best friend and mother in law, Adeline Vullo who passed on March 2nd. Gloria and Danae wish to thank the Staff at Hospice of the Sacred Heart for the loving and compassionate care they extended to David and his family. As per David’s wishes, there are no calling hours. Arrangements by the Edward J. Chomko Funeral Home & Cremation Services, West Scranton.