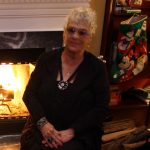 Dolores “Dolly” Laboranti, 83, of West Scranton, died Thursday October 19, at Riverside Nursing and Rehab Center, Taylor. Her husband of 50 years, John “Jack” Laboranti died July 8, 2012. Born in Scranton, she was the daughter of the late George and Helen Slivkanich Stelmak. A graduate of West Scranton High School, “Dolly” and “Jack” were owners of service stations, ceramic studios and a deli on Capouse Avenue prior to Jack’s retirement. Dolores also had worked as a Dietary Supervisor at Laurel Hill Nursing Home, Dunmore. She is survived by her daughter, Valerie Laboranti and husband Bernard Tiger, Coatesville, one grandson, Michael Tiger, one son, John Laboranti Jr., Scranton, one brother, Nicholas Stelmak and wife Marie, Scranton, nieces, nephews and cousins. She was also preceded in death by one sister, Joan Vass and one nephew, Nicholas Stelmak Jr. Dolly also leaves behind her beloved pet “Molly”. Molly was a senior dog adopted from the Griffin Pond Animal Shelter. Molly has a new forever home with Val, Bernie and Mike. Donations in memory of Dolly can be made to the Lackawanna County Humane Society. The family will host a Celebration of Life at a later date. Arrangements under the care and direction of the Edward J. Chomko Funeral Home & Cremation Services, West Scranton.