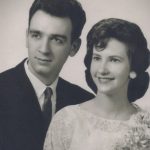 Viewing for family and friends will be on Thursday, 4 until time of services at 6 pm. Interment will be private in Cathedral Cemetery.

A Blessing Service will be officiated on Thursday at 6 pm, by the Rev. Richard Fox.

Donald W. Trager, 80, of West Scranton, died Sunday night at home, with his family at his side. He is survived by his wife Judith Williams Trager and the couple would have celebrated their 58th wedding anniversary on Monday, February 25. Born in Scranton, he was the son of the late Wilbur and Marie Leidinger Trager. Donald was a 1956 graduate of West Scranton High School, retired from Chamberlain Corporation after 38 years and was a member of St. John the Baptist Church in West Scranton up until its closing. Prior to his illness, Donald enjoyed bowling, fishing, golfing, rock & roll music and going to concerts. He especially enjoyed attending activities and events of his children and grandchildren. Donald was a loyal fan of the New York Mets and Penn State Football. He greatly missed the company of his three dogs, Ginger, Patches and Reba. He is also survived by two sons, Donald S. Trager and wife Robin, Scranton, Michael J. Trager and companion Amber Fagan, Scranton, one daughter, Donna Marie Sokolowski and husband Walter, Scott Twp. Six grandchildren; Matthew, Michael and Joseph Trager, Andrea Sokolowski, Robert Clarke and John Walker. Two great grandchildren, John and Ava Walker. One brother, Dennis Trager, Seattle, WA, two sisters; Marcia Zabawa, Clarks Green, Carole Percival, Clarks Summit, nieces, nephews and cousins. Donald’s family wishes to extend a very warm thank you to his physicians and the staff of Compassionate Care Hospice for the love and care extended to their husband, father and Bompa. A Blessing Service will be officiated on Thursday at 6 pm, by the Rev. Richard Fox, in the Edward J. Chomko Funeral Home & Cremation Services, 262 Railroad Avenue, West Scranton. Viewing for family and friends will be on Thursday, 4 until time of services at 6 pm. Interment will be private in Cathedral Cemetery. In lieu of flowers, donations can be made to St. Jude Children’s Research Hospital, 501 St. Jude Place, Memphis, TN 38105. To leave a personal condolence, please visit the funeral home website.