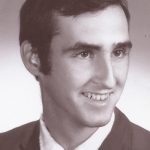 Edward C. Evarts, 67 of Scranton, passed away on Tuesday. He was the son of the late David R. and Katherine Evarts. Before retirement, Ed worked as an auto mechanic for Chet’s Garage and Dick’s Sunoco. He is survived by five brothers, George, Richard, Danny, Peter, Tim, three sisters, Connie, Alberta, Betsy, along with several nieces , nephews and brother inlaw, Doug, who assisted in his care. He was also preceded in death by a sister, Joy Faith Evarts. Ed was devoted to his family and friends and will be greatly missed. Services will be private at the convenience of his family.