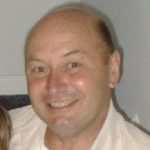 Edward Harold Harris Jr, at the age of 72, succumbed to a stroke on Sunday, December 17th, 2017. He was the youngest son of Helen and Edward Harris, and was part owner of Harris’s Bar in Keyser Valley. Edward proudly defined himself as a family man, marksman and hunter. He was also known by his inner-family as, The King of Keyser Valley, KiKi Earl and Ed-Earl. He served honorably during the Vietnam War as an aircraft mechanic in the Air Force. He married the love of his life, Joan Sharon Campbell. He is survived by her and their children, Edward and Steven Harris and his sister, Carol Copeland. He loved his deceased brother (Thomas) and his children, Christine, Thomas and Diane Harris as his own. He also loved Kim Nemitz as a daughter (and John) and her children, Raina and Elizabeth as his grandchildren. Ed’s family were at his bedside when he peacefully passed. A viewing for family and friends will be held on Thursday, 3 to 6 pm in the Edward J. Chomko Funeral Home & Cremation Services, 262 Railroad Avenue, West Scranton with services at 6 pm, officiated by Janice Novotka, a certified funeral celebrant. Interment with Military Honors will be held privately in Fairview Memorial Park, Elmhurst.