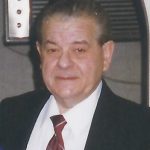 Edward J. Clarke, 81 of West Scranton, died Monday in Scranton Regional Hospital. His wife of 58 years is Regina Malek Clarke. Born in Scranton, he was the son of the late Thomas J. and Martha E. Sink Clarke. A 1951 graduate of West Scranton High School, he was an Army veteran serving in Germany and was a member of the National Guard serving with Co. B, First Battle Group, 109th. Inf., and was awarded the Soldier of the Year as a Staff Sergeant. Ed retired as a supervisor for M.W. Wood Meat Packing. Edward was an avid antique car fan and was a member of The Antique Automobile Club and former member of the VFW and American Legion. He is also survived by one brother, Thomas E. Clarke Jr and wife Dawna, Titusville, FL, a sister inlaw, Judy Clarke, Scranton, one niece, several nephews and his feline companion, Punky. He was also preceded in death by one brother, Robert C. Clarke. Funeral Services will be held on Saturday at 10 am in the Edward J Chomko Funeral Home & Cremation Services, 262 Railroad Avenue, West Scranton, with the Rev. Lester Stephenson, Officiating. Viewing for family and friends will be on Friday, 4 to 7 pm. Interment with Military Honors will be in SS Peter and Paul Roman Catholic Cemetery, Taylor.