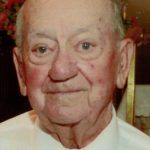 A Mass of Christian Burial will be celebrated on Thursday, September 1, 2022, at 10 am in St. Ann’s Basilica.

Edward J. Soloski Sr., 94, of West Scranton, passed on Thursday, August 25, 2022 at Elan Skilled Nursing and Rehab, Scranton. His wife of 60 years, Florence M. Soloski, passed on January 29, 2015. Born in Scranton, he was the son of the late Thomas and Anna Cegelka Soloski. Ed was educated in Scranton schools, was a WW II United States Army Veteran serving with the 63rd Infantry during the occupation of Japan and was retired as a carpenter for the Scranton School District. He was a member of St. Ann’s Basilica Parish and American Legion Kosciuszko Post 207. He is survived by two sons; Joseph Soloski, Edward Soloski Jr. and wife Lynn, all of West Scranton, two granddaughters; Melissa Moran and husband John, Ashley Soloski and fiancée James Halbert, two great grandchildren; Piper and Shamus Moran. He was predeceased by his wife Florence, parents and one brother; Thomas Soloski Jr. A Mass of Christian Burial will be celebrated on Thursday, September 1, 2022, at 10 am in St. Ann’s Basilica. Interment will follow with Military Honors at Cathedral Cemetery. There are no calling hours at the funeral home. Arrangements are under the care and direction of the Edward J. Chomko Funeral Home & Cremation Services, West Scranton.