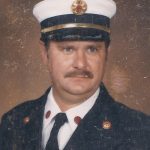 Edward J. Wolski Jr., 71, retired Assistant Fire Chief for the City of Scranton, of West Scranton, died Saturday after being stricken ill at home. His wife of 47 years is Joann Sena Wolski. Born in Scranton on June 14, 1943, he was the son of the late Edward J. Sr. and Helen Antonish Wolski. A 1961 graduate of West Scranton High School, he served his country as a Sergeant with the Marine Corps, having served in the Mediterranean and the Middle East. Edward retired as an Assistant Fire Chief for Scranton, and was a member of St. Lucy’s Church and a former member of SS Peter & Paul Roman Catholic Church, and an active member of the Marine Corps League. He is also survived by two sons, Joseph Wolski and wife Alison, Boyds, MD, Michael Wolski and wife Elizabeth, Washington, DC, two grandchildren, Alexander and Nikolai, and several cousins. Edward was a loving husband, father and grandfather who was proud and honored to serve his city and his fellow firefighters. His funeral will be on Thursday, from the Edward J. Chomko Funeral Home, 262 Railroad Avenue, West Scranton, with Mass of Christian Burial to be con-celebrated at 9:30 am, in SS Peter & Paul, Roman Catholic Church by the Rev. Sam J. Ferretti, Pastor. And Deacon Carmine Mendicino. Interment with Military Honors will follow in Cathedral Cemetery. Viewing for family and friends will be on Wednesday, 5 to 8 pm.