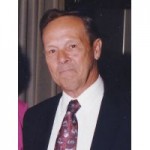 Edward L. Wyshock, 85, of West Scranton, died Monday in Commonwealth Hospice at Regional Hospital of Scranton. His wife of 50 years, Eleanor Agnes Rasieleski Wyshock died December 6, 2003. Born in Scranton, he was the son of the late Joseph and Isabelle Madus Wyshock. Educated in Scranton Schools, he was an Army veteran of WW II, had been employed by the Scranton DPW, retired from PG&W and was a member of St. Patrick’s Church, the former Lithuanian Club, the American Legion and the Mill Creek Sportsmen Club. He is survived by 1 son, Edward G. Wyshock M.D. and wife Wendy, Montoursville, 1 daughter, Marianne Wyshock, Moosic, 2 grandsons, Andrew and Christopher Wyshock, 2 sisters, Marion Swetz and Joan Kozloski, both of Scranton, nieces and nephews. He was also preceded in death by 1 brother, Joseph Wyshock. His funeral will be on Thursday, with Mass of Christian Burial at 10 am in the Immaculate Heart of Mary Chapel, Oram Street, Scranton. Interment with Military Honors will follow in Cathedral Cemetery. The family will receive friends at the church, 9:30 am until time of Mass. Edward’s family wishes to extend a special Thank You to the doctors, nurses and staff at Commonwealth Hospice and Regional Hospital of Scranton, for the compassionate care given to their dad. Arrangements under the direction of the Edward J. Chomko Funeral Home, 254-268 Railroad Avenue, West Scranton.