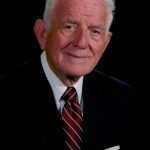 Edward Michael Marinchak Sr. met His Savior on Monday, April 19, 2021, he was 89 years old. He is survived by his wife Loretta of King of Prussia, PA, son Edward Marinchak, Jr. of NJ, daughter Lisa Poole of FL, four grandchildren: Andrew Marinchak, Emily Marinchak, Robert Poole and Sierra Poole, and his sister Marlene Laskowski of CT and sister in law Joan Bei of NY.

Ed was born on September 22, 1931 in Scranton, PA to George & Anna Marinchak.  He graduated from West Scranton High School in 1949. Ed served in the US Army as an MP – a Korean War veteran – from 1952-1954 when he was honorably discharged. Ed and Loretta were married in 1954. They shared 67 beautiful years of marriage, a true example of love and family, and a blessing from God. He earned a BS in Electrical Engineering from the University of Scranton in 1963 after nine years of night school. He was a devout Catholic and loved His Lord. To him, family was everything, a loving husband and father.  He was an avid golfer, skier, tennis player and loved cruising with his beautiful bride. Ed was employed at Burroughs in Great Valley PA, IBM in Poughkeepsie, NY and The Naval Air Development Center (NADC) in Warminster, PA. He was an active member of Our Mother of Divine Providence Church in King of Prussia, PA where he served on Parish Council, Eucharistic Minister, Religious Education (CCD) for 16 years and was awarded Confraternity of Christian Doctrine of St. Pius X.