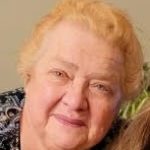 Calling hours will be on Friday at St. Patrick’s Parish, 1403 Jackson Street, Scranton from 11am to 1pm with Mass of Christian Burial to be celebrated by Rev. Richard Fox, Pastor

Elizabeth (Betty) Stefani, of West Scranton, Pa. passed away on October 5, 2022.  She was the daughter of the late Leo Wiscosky and Mildred Rostasky.  She was a wonderful, devoted wife to her most beloved late husband of 43 years, Lino Stefani; mother to five adoring children; and doting grandmother to 11 grandchildren.  If you had to ask what her greatest accomplishment was, she would say “family.”  Ultimate devotion to her family was something that was innate in her nature.  There wasn’t anything that mom, gram, or mam would not do for them.

Betty graduated from Scranton Tech High School and continued her education at Mercidian School of Nursing. She worked as a Licensed Practical Nurse for over 20 years at the private practice of Dr. Peter Favini and then at the Mercy Hospital Scranton before retiring in 2009 at the age of 70 where she was a smart, loving, and dedicated nurse. Betty was a devoted parishioner of St. Patrick’s Parish. She loved telling stories to her family, playing slot machines at the casino’s, swimming at Weston Field with her friends, but most of all spending time with her grandchildren, which brought her so much joy.

She was also preceded in death by her sister Leona Charlton and brother, Leo Wiscosky. She leaves behind five children: John Stefani (wife: Erin) of Scranton, Paul Stefani of Scranton (wife: Angela), Suzanne Hilaire (husband Brian) of Mountaintop, Alan Stefani of Scranton, and Maria Gougoustamos (husband: Stavros) of Allentown.  Her 11 grandchildren include Daniel, Emily, Paul Jr., Julia, Lenah, A.J, and Ryan Stefani, Elizabeth Shortridge, and Yianna, Evangelina, and Christina Gougoustamos.  She is also survived by sister, Beverly Bartalotta and brother John Wiscosky, along with many nieces and nephews that knew her as Aunt Lizzy.

Calling hours will be on Friday at St. Patrick’s Parish, 1403 Jackson Street, Scranton from 11am to 1pm with Mass of Christian Burial to be celebrated by Rev. Richard Fox, Pastor

Arrangements have been entrusted to the care and direction of the Edward J. Chomko Funeral Home and Cremation Services, West Scranton.