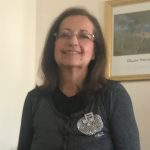 A memorial service will take place at a later time.

Esther was born in Ibague, Colombia, daughter of Jose and Sylvia Martinez. She studied Piano, Organ, and Spanish Literature. She enjoyed playing the Melodica.

Esther moved to New Jersey and worked in New York City as a legal secretary at a law firm in the early 90’s. Esther later moved to Scranton, Pennsylvania and dedicated her life to nursing. Esther loved her job as a CNA. She worked as a private duty nurse and also at various Home Health Care Agencies. One of her greatest joys was traveling the world with her daughter and playing the piano for her patients. She was a member of the Scranton Seventh-day Adventist church and enjoyed playing the piano & organ there as well.

Esther is survived by her daughter, Vanessa Mendez, and husband, John Demkosky, along with her brothers, Manuel Sierra, Ebed Martinez, Arnoldo Martinez, Misael Martinez and many nieces and nephews. She is preceded in death by her parents and brothers, David Martinez, Jairo Martinez, and Abinadad Martinez.

May she finally rest in peace with loved ones who passed before her and as she would always say “Keep a song in your heart. Keep smiling, God bless.”

A memorial service will take place at a later time. Arrangements have been entrusted to the care and direction of the Edward J. Chomko Funeral Home & Cremation Services, West Scranton