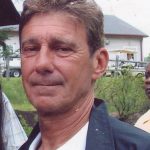 Viewing for family and friends will be on Friday, 5 to 8 pm.

Funeral Services will begin on Saturday at 9 am from the Edward J. Chomko Funeral Home & Cremation Services.

Mass of Christian Burial in St. Lucy’s Church at 9:30 am, to be celebrated by the Rev. Sam J. Ferretti, Pastor.

Francis “Frank” M. Ottone Jr., 65 of West Scranton, died peacefully with his family at his side on Monday night. His wife of 41 years is Cindy Wirth Ottone. Born in Scranton, he is the son of the late Francis M. Sr. and Santina Ludovici Ottone. Frank was educated in the Riverside Military Academy and was a 1972 graduate of West Scranton High School. Frank had been employed by the Erie-Lackawanna Railroad and the Scranton DPW.

Frank was a longtime volunteer with the West Scranton Falcon football organization, where he coached for many years, and even after his children were grown, he and his wife Cindy would spend their Sundays filming the games and taking photos for the teams. His involvement is embodied by the Frank Ottone Award that is given out yearly.  He loved nothing more than giving anything he could to youth sports leagues – even donating his own money to pay for equipment, uniforms, and sign up fees for those less fortunate.

Frank was a loving husband, father, friend, and his proudest moment was becoming a grandfather to Alexander and Lorenzo who he cherished with every fiber of his being and their smiles and laughs made him light up no matter the circumstances.

Frank had the personality that was one of a kind – everyone who knew him knew they would never go hungry, never go cold, and would always have a hot cup of coffee and an ear to bend no matter the time of day. His door was always open to anyone who needed a place to cry, laugh, or just sit. His level of compassion and caring goes far and above most and he will be deeply missed for his jokes, his stories, and his ability to make anyone feel at home.  Frank never went without a smile when he hosted his “Old Men’s Club” in his most prized possession, his custom built garage, that housed his Corvettes that he cherished and loved and will be passed on to his children and grandchildren to let his love of the cars live on.

The family would like to thank Dr. Baehring at Yale University Neurosurgery, Dr. Peters from NROC & Dr. Hyzinski Hematology and Oncology, the Nurses and Doctors at CMC, and the Hospice Nurses of Sacred Heart.

Funeral Services will begin on Saturday at 9 am from the Edward J. Chomko Funeral Home & Cremation Services, 262 Railroad Avenue, West Scranton, with a Mass of Christian Burial in St. Lucy’s Church at 9:30 am, to be celebrated by the Rev. Sam J. Ferretti, Pastor. Interment will follow in Cathedral Cemetery. Viewing for family and friends will be on Friday, 5 to 8 pm.