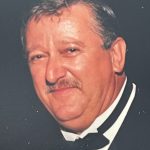 Viewing for family and friends will be on Thursday, 4 to 7 pm.

Private services and interment will be officiated by the Rev. Philip Harendza, Pastor of St. Michaels Ukrainian Orthodox Church.

Frank Drost Sr., 79, of Olyphant, passed on Sunday at the Lackawanna Health and Rehab Center. His wife of 54 years is Gloria Drost. Born in Scranton, he is the son of the late Peter and Mary Drost. Frank was educated in Scranton Schools retired from Roadway Trucking and was a former member of St. Michaels Ukrainian Orthodox Church, Scranton. Frank was a member of Teamsters Local 229 Union, was a former coach for the Lackawanna Little League and the Falcons Jr. Football of Keyser Valley and after retirement he was a volunteer for the American Red Cross. Along with his wife Gloria, he is survived his daughter, Lisa Bauman and husband Robert Sr., South Carolina, his son, Frank Drost Jr. and wife Kristina, South Carolina, his sister, Helen Hludzik, Old Forge and his brother, Nicholas Drost, Moosic, two grandsons, Robert Bauman Jr. and Bradley Bauman, nieces, nephews and cousins. Frank was predeceased by two brothers; Peter and Michael Drost, and five sisters, Anna Rodeman, Catherine Novitsky, Rose Kocsis, Julia Schadt and Mary Drost. Viewing for family and friends will be on Thursday, 4 to 7 pm. In the Edward J. Chomko Funeral Home & Cremation Services, 262 Railroad Avenue, West Scranton Masks and social distancing are required. Private services and interment will be officiated by the Rev. Philip Harendza, Pastor of St. Michaels Ukrainian Orthodox Church.