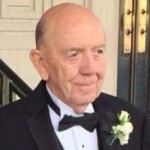 Frank M. O’Connor, whom was also known as Kewpie, 81, of Taylor, died Wednesday, surrounded by his loving family at Geisinger/CMC. His wife of 48 years is Carol A. McCarthy O’Connor. Born in Scranton, he was the son of the late Edward and Catherine Hoar O’Connor. A 1952 graduate of St. Ann’s High School, he retired as an engineer from the Erie-Lackawanna/Conrail Railroad, and was a lifelong member of St. Ann’s Basilica Parish and the Irish Cultural Society. Frank was often seen in many of the area coffee shops, where he had many friends through the years. He was also an avid fan of Notre Dame football and the New York Yankees. In addition to his wife Carol, he is survived by two daughters, Katie Esposito and husband Michael III, Scranton, Bridget Chomko and husband Andrew, Scranton, two sons, Patrick O’Connor, Scranton, Timothy O’Connor, Taylor, three grandchildren, Devon O’Connor, Marianna and Michael Esposito IV, sister inlaw, Betty O’Connor, Scranton, nieces, nephews and cousins. He was also preceded in death by two brothers, Robert and Edward O’Connor. A Mass of Christian Burial will be celebrated on Monday at 10 am in St. Ann’s Basilica by the Rev. Francis Landry, C.P., Pastor. Inurnment will be private in St. Catherine’s Cemetery, Moscow. Viewing for family and friends will be on Sunday, 3 to 7 pm in the Edward J. Chomko Funeral Home & Cremation Services, 262 Railroad Avenue, West Scranton.