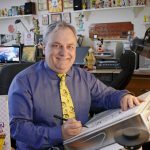 Gary L. Cangemi, 62, of Scranton, died Saturday at Regional Hospital of Scranton. Born on April 29, 1954 in Arlington, VA, to the late John and Ethel Cangemi. He graduated from Peary High School, Rockville, MD and earned his B.A. in 1976 from the University of Scranton. Gary was an extremely talented artist, writer and cartoonist that inspired countless people through his work. He was the creator of the nationally syndicated comic strip Umbert, comic books, trading card series and recently published his first children’s book. Gary loved his community and endlessly volunteered. He was a Boy Scout Leader for more than a decade and an avid sports fan. He started the soccer program at West Scranton High School, coaching for six seasons. Most of all, Gary was a kind, caring soul and dedicated family man who loved to entertain others through stories, art and music, and especially with his children and twin granddaughters; He is survived by his loving wife of 39 years, Nancy Watkins Cangemi, his children, Peter Cangemi and wife Lauren, and their children, Madison and Evelyn, Houston, TX, Katherine Cangemi and fiancé Matt Albracht, Philadelphia, and Becca Cangemi, Scranton. He is also survived by three sisters, Donna, Kelly and Angela, three brothers, John, Mike and Chris, and was also preceded in death by one brother, Steve. Gary’s family would like to thank the doctors, nurses and staff at Regional Hospital of Scranton for their kindness and caring. Funeral Services will be held on Wednesday,  in the Edward J. Chomko Funeral Home & Cremation Services, 262 Railroad Avenue, West Scranton at 10 am. Viewing for family and friends will be on Tuesday, 3 to 7 pm. Interment will be private.