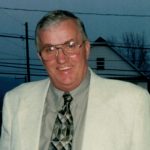 A private viewing was held.

Private inurnment will be in Milwaukee Cemetery.