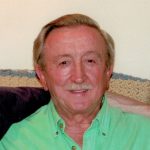 Calling hours for family and friends will be on Tuesday, 4 to 7.

Mass of Christian Burial will be celebrated on Wednesday, at 1:30 pm in St. Ann’s Basilica.

Gerald “Jerry” Stanek, 78, of West Scranton, passed on Thursday, April 29, at Geisinger/CMC after being stricken ill very suddenly. His wife of 46 years, Patricia Stanek, passed on September 19, 2012. Born in Scranton, he is the son of the late Andrew and Victoria Stanek. A graduate of West Scranton High School, Jerry retired from the University of Scranton as a maintenance manager. After his retirement, he was employed by Sarno and Son. Jerry served with the Army Reserves, and was a member of St. Ann’s Basilica Parish. Jerry enjoyed gardening, fishing and looked forward to watching his favorite polka show every Saturday night. He was devoted to his family and to all that knew and loved him. He will be forever in our hearts and sadly missed. Jerry is survived by his daughter, Michelle Coolbaugh and husband Kevin, Scranton, two grandsons, Matthew Stanek and Jeremy Coolbaugh, two brothers; Robert Stanek, Scranton and David Stanek and wife Rose, Medina, Ohio, nieces and nephews. He was also predeceased by his son, Michael Stanek, and sister in law Theresa Stanek. Mass of Christian Burial will be celebrated on Wednesday, at 1:30 pm in St. Ann’s Basilica. Interment will follow in Cathedral Cemetery. Calling hours for family and friends will be on Tuesday, 4 to 7 pm in the Edward J. Chomko Funeral Home & Cremation Services, 262 Railroad Avenue, West Scranton.