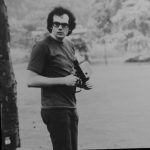 A Celebration of Life will be held on Sunday, 2 to 5 pm for family and friends, in the Edward J. Chomko Funeral Home & Cremation Services

Gerald T. “Jerry” Sangiuliano, 73, of West Scranton, died on Thursday, November 22, 2018, at the Allied Hospice Center, with his daughter at his side. Jerry was married to the late Dianne Caudullo Sangiuliano, who passed away in 2003. Born in Scranton, he was the son of the late Victor and Ida Scioscia Sangiuliano. Jerry was a graduate of West Scranton High School and the School of Visual Arts in New York City. His passion for photography was with him throughout his entire life and was an avid student of film. Jerry had written many screen plays and directed short films. In 1991, he directed and produced the feature film, “Fractals” which was shot in the greater Scranton area. He is survived by his children, Kristopher Sangiuliano, Scranton, Alicia Sangiuliano, Ithaca, NY, granddaughters; Emma and Leona Sangiuliano. He was also predeceased by his brother, Victor. A loving grandfather, Jerry always put others ahead of himself. Caring for and helping his entire family was his main focus in life. He will be greatly missed by the many lives he touched.  A Celebration of Life will be held on Sunday, 2 to 5 pm for family and friends, in the Edward J. Chomko Funeral Home & Cremation Services, 262 Railroad Avenue, West Scranton, 18505