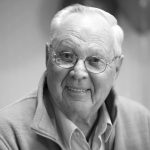 Mass of Christian Burial will be celebrated Monday, at 10 am, in The Cathedral of St. Peter, 315 Wyoming Avenue, Scranton. – Reduced and limited seating available.

Interment will be private.

Harold A. Bauman, 91, born July 7, 1929, to the late Arthur and Elizabeth Laufer Bauman, died Wednesday, October 7, 2020. He was a native of Scranton, formerly of 1020 Moosic Street, Scranton, PA. Harold was a member of St. Mary’s of the Assumption Church and later St. Peter’s Cathedral. He was educated at St. Mary’s of the Assumption School and enlisted in the Army in 1951 and was an active service member during the Korean War, serving part of his time in Okinawa, Japan.

He was the beloved husband to the late Mary P. Van Buskirk Bauman. After working two years as a carpenter’s apprentice Harold followed in his father’s footsteps, working for the railroad as a locomotive engineer, by the Lackawanna Railroad in 1954, which later became Conrail. Before retiring in 1993, he was highly regarded as a skilled engineer who was able to safely regulate train speeds through difficult and varying mountain terrain. He was a talented woodworker, and also enjoyed reading, crossword puzzles, fishing, sporting events, walking the streets of Scranton reminiscing of its rich history, driving the backroads of Northeast Pa., (he could give you directions to pretty much any where you wanted to go without needing a map) and he always had time for family and friends. Most of the sporting events he attended were to proudly cheer his sons and 8 grandchildren. He was a devoted and loyal fan of the Philadelphia Phillies. Watching baseball with Harold was educational, as he well versed in the history of the athletes, nuances of the sport, rules, strategies. He would easily engage in conversations with people in any setting, always willing to lend a hand, and was generous to those in need and befriended those who society may ignore.

In lieu of flowers, memorial gifts can be made to St. Joseph’s Center (Scranton), St. Peter’s Cathedral (Scranton), or VNA Hospice, (Olyphant).

Mass of Christian Burial will be celebrated Monday, at 10 am, in The Cathedral of St. Peter, 315 Wyoming Avenue, Scranton. Reduced and limited seating available. Masks and social distancing required. Interment will be private. Arrangements have been entrusted to the direction and care of the Edward J. Chomko Funeral Home & Cremation Services, 262 Railroad Avenue, West Scranton.