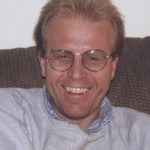 On Sunday, November 19, 2017, my dear Harry, 55 passed peacefully after prolonged illnesses which included myasthenia gravis, polymyositis, thymoma and complications due to immuno-suppression which affected his breathing. He was born Hryhory (Harry) Krewsun on December 22, 1961 to the late Wasyl and Maria Hadzenko Krewsun in Trenton, NJ.  Harry and his family were an integral part of the Ukrainian community in Trenton where they were founding members of Saint George Ukrainian Orthodox Church in Yardville.  He was a graduate of Saint George Ukrainian School.  Harry was a 1980 graduate of Ewing High School and a 1985 graduate of Texas A & M University with a degree in industrial engineering. A member of ODUM, the Ukrainian Democratic Youth Association, Harry spent countless hours working, supporting and serving as youth counselor at the Kiev youth camp in Accord, NY.  Harry served as treasurer for Saint Michael’s Ukrainian Orthodox Church for more than a decade and devoted many hours in the kitchen and upkeep of the parish.  Harry enjoyed the outdoors immensely, where many of his favorites included fishing, hiking, boating and biking.  Being an engineer, Harry could fix, create and figure out almost anything he set his mind to do.  Harry loved to cook and could make anything out of nothing.  Everyone enjoyed his bountiful meals, especially his borscht, “couscous” and his smoked meats and fish.  Harry had a passion for his accordion and played semi-professionally throughout the Trenton area in his youth.  Not many people know, but he loved to collect yardsticks and one of his greatest joys was his 1984 Toyota Supra.  He was a man of faith and principle who stood for everything that was right, just and true.

Our life together was one of love, joy and true companionship. We shared many interests especially our love of travel and experiencing how people lived in other parts of the world.  Our love of our older home was always the center of our days and inevitably a “work-in-progress”.  Though the latter years of our 25 years of marriage were ridden with his compromising health issues, Harry always managed to put a smile on his face (and on mine, too) and kept moving forward.  Always wanting to help others who, like him, may be experiencing the same medical afflictions, he organized a local support group for those suffering from myasthenia gravis.  He lost his battle sadly, but never lost his faith.  Harry was a man of inner strength and all who knew him took a bit of “Harry” with them.  He was always grateful to all those who consistently kept him in their prayers and he always ended his prayers with a prayer for them.

Friends are invited to his visitation on Friday, November 24th from 5PM-7PM with panachyda at 7PM.  The funeral for my dear Harry will take place Saturday, November 25th at 10AM with visitation from 8:30AM until the time of funeral.   Both visitation and funeral will take place at Saint Michael Ukrainian Orthodox Church, 1006 Howell Street, Scranton PA 18504.  Interment Saint Michael’s Ukrainian Orthodox Cemetery, Taylor 540 N. Main Ave.