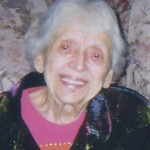 Helen A. Anthony, 95, a resident of South Abington Twp. Since 1955, began her journey to be with the Lord on Wednesday, from the VNA Hospice Unit at Geisinger/CMC. She was the widow of Andrew Anthony, who had begun that journey on March 21, 1996. They were married in Scranton on February 27, 1954. Helen was born in Scranton on March 9, 1921 the daughter of the late George and Mary Hyzen Pivornick. She was a January 1938 graduate of Scranton Technical High School and received a degree from the former Lackawanna Business College. She was employed as a bookkeeper at several businesses to include Brook Manufacturing, Fairmont Creameries, B. J. Smith Furniture, Capitol Records and Reuben H. Donnelly. Helen was a member of the Abington Senior Center and was a former Registrar of Elections for South Abington Township. She enjoyed crocheting, crossword and jigsaw puzzles and going to the casinos. On tv, she enjoyed watching figure skating, The Price is Right, Jeopardy, Lawrence Welk, Turner Classic Movies and the polkas. In 1944 she was champion of a jitterbug contest when bandleader Tony Pastor and orchestra made an appearance at the Masonic Temple in Scranton. In 1950 during her employment at Capitol Records, she had lunch with big band vocalist Helen O’Connell. Sincere appreciation is given to the staff at VNA Hospice who took tremendous care of Helen during her stay. Surviving are a son, Andrew Jr., at home and several nieces, nephews and cousins. Helen was preceded in the journey to the Lord by three siblings Joseph Pivornick and Margaret Pluciennik who were twins and Emma Pitts, two nephews, Ronald and Joseph Pitts and great nephew, Eric Pitts. Mass of Christian Burial will be celebrated on Monday at 9:30 am in St. Lucy’s Church, West Scranton, by the Rev. Fr. Sam J. Ferretti, Pastor. Interment will follow in St. John’s Byzantine Catholic Cemetery, Minooka. Viewing for family and friends will be on Sunday, 4 to 7 pm in the Edward J, Chomko Funeral Home & Cremation Services, 262 Railroad Avenue, West Scranton