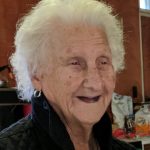 Viewing for family and friends will be on Friday, 5 to 8 pm, with Parastas starting at 7:30pm, in the Edward J. Chomko Funeral Home & Cremation Services, 262 Railroad Avenue, West Scranton.