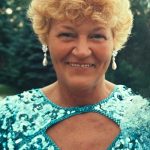 A celebration of life ceremony will be private.

Imogene Kay Reggie, 82 resident of Scranton passed away Saturday evening at home. Surrounded by her family she died peacefully after her courageous battle with cancer. Imogene was born in Clinton Iowa May 28th, 1940. She was the daughter of Gerald and LuVerne Vogt, raised on the farm in Grand Mound Iowa. Imogene was on the basketball team and won the Betty Crocker award at her H.S. in Calamus, IA. As a young woman she received her Flight Attendant Certification and worked as an Administrative Assistant in the Pentagon. Imogene was a long-time resident of Thornhurst where she raised her children. She also worked at the family’s flooring company for many years and retired as a CNA at St. Joseph’s Center. She was fortunate to have traveled to many countries. Enjoyed playing cards, quilting, baking, bird watching, ice skating, landscaping and raising boxer dogs. She was a huge fan of car racing, especially going to see her son race at dirt tracks. Survivors include her children, Danial Reggie and wife Marlene, Linda Reggie, Anthony Reggie, Jovanna (Nick) Reggie, Gerald Reggie and wife Debbie all of PA. Six grandchildren Mercedes Fees, Joseph Reggie, Jacob Makaravitz, Sabreena Tigue, Kayla Reggie and Kaylynn Reggie. Five step grandchildren, seven great grandchildren, nieces and nephews. Also surviving are two sisters Elizabeth Braet of WY and Cathleen (Ronald) Peterson of IA She was preceded in death by her brother Gary Vogt and her parents. The family would like to thank Allied Hospice Home Care for their support. A celebration of life ceremony will be private. Arrangements are under the care of the Edward J. Chomko Funeral Home & Cremation Services.