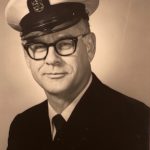 Viewing with family and friends will be on Tuesday, 4 pm to 7 pm and services will be held on Wednesday at 11:00 am, both in the Edward J. Chomko Funeral Home and Cremation Services, 262 Railroad Avenue, Scranton, PA.

Jack George Szydlowski, 85, passed away Tuesday, November 9, 2021, at his home in Clemmons, NC, after a courageous battle with heart failure.  He was born October 27, 1936, in Scranton, PA, to the late Benjamin and Bertha Szydlowski.  He married the love of his life, Marion Shaw Szydlowski on September 24, 1960, who preceded him in death.  He served in the US NAVY (SEABEES) from 1956 to 1982.   Retired as a Command Master Chief Petty Officer.  He has had a varied career seeing duty in such places as Virginia, Delaware, California, Rhode Island, British West Indies, Alaska, Philippines, Hawaii, Islands throughout the Pacific, Vietnam, Iceland, and Maryland.  Served 3 tours in Vietnam with the Naval Mobile Construction Battalion 40, in Chu Lai. He was one of the first to greet Astronaut John Glenn when he was stationed in Grand Turk Island, on board the ship (USS Noa, DD-841) following the historic 3-orbit journey around the Earth on the Mercury Freedom 7 capsule.

After the military retirement he served as a letter carrier for the US Postal Service for 22 years.  Jack was an avid golfer (year-round, even in the snow.) He loved to fish but his most favorite pastime was spending time with his most prized possessions, his great-grandchildren.  Jack is survived by one daughter, Robyn Scott, Clemmons, NC, one son John Szydlowski, Clemmons, NC.  Two grandchildren, Steven Scott and fiancé Samantha, Lewisville, NC, Ryan Scott and wife Angel, Clemmons, NC.  Ten great grandchildren, Elizabeth, Kyara, Chelan, Aeryn, Sean, Jack, Saoirse, Deaglan, Skyler, and Caleb.  A sister, Shirley Paris (Joe) of Endicott, NY.  Numerous nieces, nephews, and cousins. He was preceded in death by a sister, Joan Silva and a brother, Edward Szydlowski.

Viewing with family and friends will be on Tuesday, 4 pm to 7 pm and services will be held on Wednesday at 11:00 am, both in the Edward J. Chomko Funeral Home and Cremation Services, 262 Railroad Avenue, Scranton, PA.  Entombment with Military Honors will follow in Fairview Memorial Park Mausoleum, Elmhurst, PA.  In lieu of flowers the family asks that donations be made to Saint Jude’s Children’s Hospital, Jack’s favorite charity.