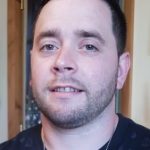 Burial will be Private.

James Joseph King III, 34, battled with addiction since 2007, but he succumbed to addiction Sunday night at Geisinger-CMC. James was born in Scranton and is the son of Claire King and the late James Joseph King Jr. who died in 2012. He was a 2003 graduate of Scranton High School.

Addiction can be called a disease, illness, whatever stigma or name people want to call it, but it hurts so many more people besides the ones who are addicted. James was a loving father, son, brother, and friend to many, who was devoted to helping others but struggled to help himself. James was a hard worker and his work ethic was often the reason for the relationships that he made. He enjoyed watching professional sports, especially the Oakland Raiders and the Pittsburgh Pirates.

James leaves behind a 3 year old son, James Joseph King IV, Scranton, sister Ashley King Gyuriska and husband Greg, Scranton, and godson, Gregory. Katie Strong was his loving companion and mother to his son. James is also survived by his god-parents, aunts, uncles, and cousins who he enjoyed spending time with.

A viewing for family and friends will be on Friday from 4-7 PM, with a prayer service at 7 PM in the Edward J. Chomko Funeral Home & Cremation Services, 262 Railroad Avenue, West Scranton. Burial will be private.