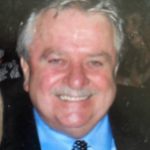 Slick’s wishes were to have no public services.

Born in Scranton, he was the son of the late J. Gaynor and Margaret McHale Cawley. Slick was a graduate of Scranton St. Patrick’s High School in West Scranton, was a United States Army veteran having served at Fort Knox, Kentucky and was a member of the former Holy Cross Church, was a member of the Ironworkers Union, was the former owner of Legends Lounge at South Side Bowl and served as the Director of Lackawanna County Parks and Recreation from which he retired. Slick was an avid golfer and loyal Steelers fan. He cherished his time with The Irish American Men’s Golf Association. He was a member of the American Ukrainian Veterans Association, The Fraternal Order of Eagles, Aerie 314, and the American Legion Post 568. He was also a member of The Scranton St. Patrick’s Day Parade Association. Slick was very proud of his Irish heritage. He always had a joke ready to make you laugh and put a smile on your face.

He was preceded in death by his parents, brothers; PA State Representative, J. Gaynor Cawley, Patrick G. Cawley, sister; Linda Conrad and brother-in-law; Andrew McAndrew, sister in law; Barbara Cawley. Slick’s wishes were to have no public services. In lieu of flowers, memorial contributions can be made to the American Cancer Society, PO Box 862, Pittsburgh, PA 15106, or call; 1-800-227-2345. Arrangements were under the care and direction of the Edward J. Chomko Funeral Home & Cremation Services, West Scranton.