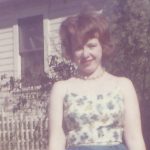 – Viewing will be in the church for family and friends, 8:30 am until time of Mass. Interment will follow in St. Michael’s Byzantine Catholic Cemetery, Dunmore.

Jane Rafter Rusinko, wife of Paul A. Rusinko Sr, Clarks Green, passed away on Tuesday, October 1, 2019, after an extended stay in a Dunmore Nursing Home as a result of a major stroke.

Jane had held a very responsible position at Capital Records, prior to, and after marriage, whereby Capital Records offered her an important position with them at their Main headquarters in California which she refused because of her strong family ties in Scranton.

Jane & Paul were products of the “Rock ‘n Roll” era & the JFK Years!  They had their own circle in which they frequented any place that kept that “Rock ‘n Roll” music playing…including every nightclub in Scranton & Dunmore, and the Pocono Mountain nightclubs.  Jane was famous for her ability to keep up with Chubby Checker’s “Twist” dance; she could out- twist anyone on the floor…she had the moves and energy, as well as being great “under the Limbo stick”!  Jane & Paul idolized John F. Kennedy, and all the Kennedy’s, with Jane, herself, being a fine red-haired, blue-eyed Irish Colleen…JFK was her idol. She had the pleasure of meeting him personally at the old Hotel Casey while he was running for President.  Jane & Paul enjoyed a wonderful life together since their teens…they traveled everywhere, from Cape Cod, one of their favorites, to Europe’s Portugal.  They enjoyed their home, their families, and the simple things in life, especially their special love & companionship they had for each other.  Jane was Paul’s fragile China Doll, and Paul was her “teenage heart throb”!  Jane was a person who had no enemies because she loved everyone and never had a bad word for anyone.  We always said, she should have been a saint!  Jane, may you rest in peace without pain while you wait for your teen-age idol, Paul, to join you.

A Mass of Christian Burial will be celebrated on Saturday, by the Rev. John Doris, at 9:30 am at St. Mary of Mount Carmel Church, 322 Chestnut Street, Dunmore, PA 18512.

Viewing will be in the church for family and friends, 8:30 am until time of Mass. Interment will follow in St. Michael’s Byzantine Catholic Cemetery, Dunmore.

Arrangements have been entrusted to the direction and care of the Edward J. Chomko Funeral Home & Cremation Services, West Scranton.