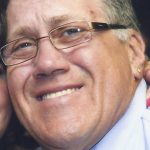 Viewing for family and friends will be on Wednesday, 5 to 8 pm

Mass of Christian Burial will be celebrated on Thursday, at 10 am in St. Patrick’s Church, 1403 Jackson St., West Scranton, by the Rev. Richard Fox, Pastor.

Jerry Foley, aka Irish Dr. Jerry Foley, 65, of the Keyser Valley section of West Scranton, passed away on Friday, March 8 at his home. Born in Scranton, he was the son of the late Jeremiah and Anne Margaret Fuller Foley. Jerry was a heavyweight amateur and professional boxer fighting under the promotion and management of Hook O’Malley and would assist in the training of upcoming boxers at the Irish Boxing Club during its infancy, and had fought both nationally and internationally. Jerry was known in the Boxing World as “Dr. Jerry Foley”, and he drew capacity crowds at his home ring at the former CYC. Jerry had fought major contenders such as Mitch Green who fought Mike Tyson for the Heavyweight World Championship and several additional ranked boxers. He was a member of the former St. David’s Roman Catholic Church on South Keyser Avenue. Jerry worked and retired from the Scranton School District in the custodial/maintenance department and was well loved by the teachers/staff and students of the Scranton School District. Jerry was always a gentleman to the people he met and was known to have a friendly joke upon greeting you. He remained friends with many from the neighborhood as well as his co-workers, the Keyser Valley Boys, and with the boxers he trained and had bouts with. In his spare time he would cut grass for many people and local businesses. He will always be remembered as a “call it as you see it”, type of man. He will be missed by many of the friends he leaves behind and his spirit will be forever remembered. Jerry is survived by his daughter, Jill Foley Kranson and husband Ryan, Scranton and twin granddaughters; Madison and Kaci Kranson.  Mass of Christian Burial will be celebrated on Thursday, at 10 am in St. Patrick’s Church, 1403 Jackson St., West Scranton, by the Rev. Richard Fox, Pastor. Interment will follow in Cathedral Cemetery. Viewing for family and friends will be on Wednesday, 5 to 8 pm in the Edward J. Chomko Funeral Home & Cremation Services, 262 Railroad Avenue, West Scranton.