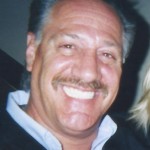 John Anthony Pizzo Jr., 63, of Scranton died early Friday after a courageous 5-year battle with cancer. He was the son of John Anthony Sr. and Maria Angelina Pizzo. John’s greatest love was his Lord and Savior Jesus Christ. He was a member of Grace Bible Church and his strong faith was contagious to everyone who knew him. John was a big fan of NASCAR and enjoyed spending time with his grandson, Luke. He will be greatly missed by his family and friends. Raised, educated and employed in Scranton, John worked in the Department of Public Works for the City of Scranton. John is survived by his daughter Philomena Pizzo, grandson Luke Pizzo, and one brother, Vito Pizzo, all of Scranton. He was preceded in death by two sisters, Philomena Pizzo Eutizi and Margaret Pizzo Sedorovitz. John’s family would like to extend a heartfelt “Thank You” to the all the men and women in the medical field who served and cared for John over these years. Calling hours will be from 4:30 PM to 6:00 PM at Grace Bible Church, 130 University Dr, Dunmore, PA 18512 on Thursday. A Home-going Celebration will be held afterwards at the church at 6:00 PM. Arrangements were made by the Edward J. Chomko Funeral Home & Cremation Services, 262 Railroad Ave, West Scranton. Inurnment will be private. In lieu of flowers, memorial contributions are preferred for Grace Bible Church, Dunmore.