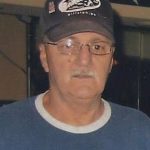 John H. Barletta, 71, died Tuesday at Allied Skilled Nursing Home. Born in Pittston, he was a son of the late Nicholas S. and Mildred McDonald Barletta. A graduate of Pittston High School, he was employed in the local trucking industry as an over the road driver. He was of the Catholic faith, an Army veteran having served in Korea and was a member of the Teamsters Union. He is survived by one son, John Jr, NJ, one daughter, Sally Barletta, NJ, seven brothers, Joseph (Victoria) Moscow, Robert (Marge) Scranton, Samuel (Kathy) Snyderville, Adam Sr. (Susan) Clarks Summit, Malcolm (Barbara) Ransom Twp., Carmen, Moscow and Richard, Scranton, one sister, Ethel, Scranton, numerous nieces, nephews and cousins. He was also preceded in death by one brother, Philip. A Celebration of Life will be held on Friday, in the Edward J. Chomko Funeral Home & Cremation Services, 262 Railroad Avenue, West Scranton. Visitation for family and friends will be on Friday 5 to 7 pm. Inurnment will be private.