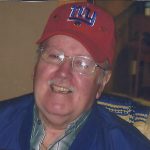 Inurnment will be in Cathedral Cemetery, Tuesday at 10 am with Military Honors.

John J. Coggins. 87, of Scranton, passed away Friday morning at Allied Services Hospice Center. Born in Scranton, he was the son of the late John G. and Caroline Graff Coggins. John attended St. Mary of the Assumption High School, and was a member of Teamsters Local 229. John retired after more than 27 years as a salesman for Pepsi Cola in 1994. His passion was his family and loved spending time with his wife Patricia, children, grandchildren and great grandchildren. He enjoyed bowling, golfing, the outdoors, was an avid fisherman and hunter. John was a lifetime fan of the New York Giants, the New York Mets and the Boston Celtics. John was a Korean War Army Veteran, having served at a Staff Sergeant with the 148th Infantry, 37th Division. John was awarded the Combat Infantryman Badge, Korean Service Medal with 1 bronze service star, United Nations Service Medal, National Defense Service Medal and the Good Conduct Medal. John met the love of his life, Patricia Ann Mitchell Coggins in 1949, and recently celebrated 70 years of being together. They recently celebrated their 66th wedding anniversary on May 2nd. John is survived by his wife, Patricia, daughters, Debra Checko, Colleen Eshelman, sons, John P. Coggins, Patrick Coggins, 9 grandchildren, 6 great grandchildren, nieces, nephews and cousins. He was also preceded in death by one son, Timothy J. Coggins, and two brothers, Robert and Edward Coggins. A Celebration of Life will held be on Monday, 4 to 6:30 pm. in the Edward J. Chomko Funeral Home & Cremation Services, 262 Railroad Avenue, West Scranton, with a Blessing Service, at 6:30 pm, officiated by Deacon Carmine Mendicino. Inurnment will be in Cathedral Cemetery, Tuesday at 10 am with Military Honors. Visit the funeral home website to leave a condolence.