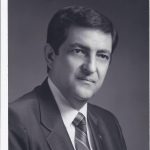 Mass of Christian Burial will be celebrated on Friday at 10 am in Holy Rosary Church, Mary, Mother of God Parish, 316 William Street, North Scranton.

Interment with military honors will follow in Cathedral Cemetery.

There are no calling hours.

John J. Martinelli Jr., 85, died Monday morning at Geisinger/CMC ICU with his loving family at his side. His wife, Mary Trunzo Martinelli, died in April of 2011. Born in Dunmore, he was the son of the late Giovanni and Antoinette Maffucchi Martinelli. John was a 1951 graduate of Dunmore High School, the University of Scranton earning a BA in Accounting and began his career in accounting with Signal Finance, then Holiday Finance and finally opening his own accounting firm, Holiday Associates Tax Service (HATS) in North Scranton. John was a Korean War Era veteran serving in the United States Air Force, before entering college. He was a member of St. Anthony of Padua Church on Wood Street until its closing and is a member of Mary, Mother of God Parish of Scranton, the San Mango D’Aquino Society, the Willow Club, San Cataldo Club, the Lions Club, Knights of Columbus, the Masons, and far too many more to list. He was a former member of the Scranton City Council, and served as Deputy Comptroller under Roseann Novembrino. John was an avid card player, loved Yankee Baseball, the New York Giants, bocce ball and was very active in the local Democrat Party and many of the campaigns throughout the many years gone by. He was also a great letter writer and was particularly known for his “poison” pen letters. Lastly, John had humorous nicknames for all his loving friends which will continue to bring laughter for many years. John is survived by two sons, John Martinelli and wife Annamae, and Joseph Martinelli, all of Scranton, two daughters, Tina Martinelli, Scranton, and Yolanda Martinelli, Covington Township. Five grandchildren, Thomas Smith, Joseph Marchese, Austin Martinelli, Giovina Martinelli, Kaile Martinelli, one great granddaughter, Dominica Padilla, one sister, Antoinette Lynch, Moosic, nieces, nephews and cousins. He was also predeceased by one sister, Marie Malowany and three brothers, Joseph, Vittorio and James Martinelli. Mass of Christian Burial will be celebrated on Friday at 10 am in Holy Rosary Church, Mary, Mother of God Parish, 316 William Street, North Scranton. Interment with military honors will follow in Cathedral Cemetery. There are no calling hours. Arrangements under the care of the Edward J. Chomko Funeral Home, 262 Railroad Avenue, West Scranton.