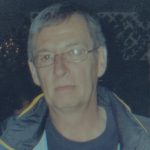 A Celebration of  Life will be held on Friday, 4 to 6:30 PM in the Edward J. Chomko Funeral Home & Cremation Services, 262 Railroad Avenue, West Scranton, with Services at 6:30 PM.

John J. Rogan Jr., of West Scranton, passed away Tuesday night surrounded by his loving family and friends, ending his 9 ½ year struggle with kidney disease. He and his wife Debbie Malos Rogan celebrated their 31st wedding anniversary on March 21. Born in Akron, Ohio, he was the son of the late John J. and Ruth Browning Rogan. He was a graduate of Olyphant High School and was a Navy Veteran. John was of the Methodist faith and was the bakery manager for Gerrity’s Supermarket in West Scranton for more than 20 years, until his illness forced him into retirement. John held a private pilot license and was an avid skydiver during his military and civilian life. He was a loving husband, father and friend who enjoyed cooking and baking for his family and friends and was the advisor in the family and would guide any one with his advice. He is also survived by four sons, John T. and companion Dawn Kolebuck, Carbondale, Eric J., Carbondale, Patrick, a City of Scranton Councilman and his wife Amanda, Scranton, and Josh, Pittsburgh. A Celebration of  Life will be held on Friday, 4 to 6:30 PM in the Edward J. Chomko Funeral Home & Cremation Services, 262 Railroad Avenue, West Scranton, with Services at 6:30 PM, officiated by Pastor Arthur Davis. John’s family expresses their gratitude to DaVita Dialysis for their extended and compassionate care. In lieu of flowers, donations can be made to the American Kidney Fund, 11921 Rockville Pike, Suite 300, Rockville, MD 20852.