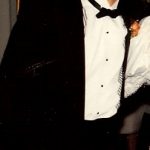 John Laboranti, 60, of Scranton, died Saturday, March 31, at Moses-Taylor Hospital, ICU after an illness. Born in La Plata, MD., he was the son of the late John “Jack” and Dolores “Dolly” Laboranti. Educated in Scranton Technical High School, John worked assisting at his dad’s service stations. John was the grandson of the late Jennie and Michael Fueshko. He is survived by one sister, Valerie Laboranti and husband Bernard Tiger, Coatesville, one nephew, Michael and his lifelong friend, Ed “Stitch” Kowalchick. John (“Lab”) was an avid sports enthusiast, whose knowledge of sports history facts and stats equaled those of a sports analyst. He was a huge fan of the Philadelphia Phillies, Indianapolis Colts and Penn State and was also a collector of sports memorabilia and coins. John was always the life of the party and made everyone laugh. He will be greatly missed by all of his family and friends. Graveside services will be held on Saturday April 14th, at 2 pm in Cathedral Cemetery. Arrangements under the direction and care of the Edward J. Chomko Funeral Home & Cremation Services, West Scranton.