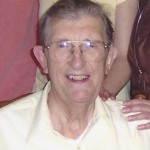 John P. Grajcar Sr., 84, of West Scranton, died peacefully on Wednesday in the VNA Hospice Unit at Geisinger/CMC surrounded by his loving family. His wife of 63 years, Rita Nercz (Neach) Grajcar, died June 10, 2014. Born in Scranton, he was the son of the late Peter and Catherine Telepechak Grajcar. A graduate of Scranton Central High School, he served as a CPO with the Naval Reserves. He was a member of St. Mary’s Byzantine Catholic Church, Scranton, where he was a member of the Holy Name Society and served as cantor for many years. He was the proud owner/operator of Johnny’s Paint and Hardware Store on South Main Avenue at St. Ann’s Street in West Scranton until his retirement. John was a member and past president of the West Scranton Lions Club, active in the Dodge Boosters Club, as well as being a founding member of the former Silver Bowling League. John was known within his family for his frequent use of 1-800 numbers as well as the pride he took in caring for his yard. John and his wife Rita enjoyed traveling extensively, playing bingo and spending time with their family. He was a person who made friends easily and was known as a real people person. He is survived by one son, John P. Grajcar Jr. and fiancée Carol Dukauskas, Scranton, four daughters, Mary Catherine Belmonte and husband Christopher, Briar Cliff Manor, NY, Susan Chattin, Rensselaer, Indiana, Linda Haddle and husband Timothy, Dallas, Luzerne County, Barbara Dunio and fiancée Jerry Melia, Scranton, 11 grandchildren, Christopher, Peter and Samuel Belmonte, Sean and Greg Cannon, Nicole Stewart, Kathryn Chattin, Sarah Hall, Jason Myslinski, Matthew and James Dunio, seven great grandchildren, Tyler, Evan, Olivia, Aeden, Raegan, Hailee, Macie Rita, one sister, Mary Kempa, Taylor, one niece and two nephews. He was preceded in death by an infant daughter, Patricia, a grandson Jeffrey Dunio and a great grandson, Jack Stewart. A special thank you is extended from John’s family to Drs. Eric Smith, Michael Turock, VNA Hospice and all of the in-home caregivers along with caring neighbors, for the thoughtful and compassionate care and help given to John and his family. An Office of Christian Burial Service will be held on Monday at 10 am in St. Mary’s Byzantine Catholic Church, Scranton, by the Rev. Leonard A. Martin, S.J., Pastor. Interment will follow in the parish cemetery. Viewing for family and friends will be on Sunday, 5 to 8 pm in the Edward J. Chomko Funeral Home & Cremation Services, 262 Railroad Avenue, West Scranton. Parastas Services will be at 7:30 pm. Panachyda Services will be in the funeral home on Monday at 9:15