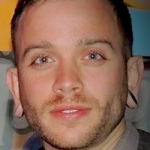 A post-COVID-19 celebration of life will be planned for Jonny’s birthday at the end of June. Arrangements under the care and direction of the Edward J. Chomko Funeral Home & Cremation Services, West Scranton

Born in Scranton, he was the son of Cindy Luongo, and John Renaldi Jr., both of Scranton.

Unique to Jonathon was the way his eyes focused on the world around him; he had a way of discovering beauty in places overlooked by most people. His mind emitted a current of creativity and lined the path to his soul with books, art, poetry, and music. He left an imprint on the local music scene with his band, Dead Radical and inspired other guitarists with his otherworldly musicality. Because of his organic, on-screen charisma, local filmmakers often utilized him on projects.

Those that were fortunate to have known Jonathon, felt his magnetism immediately and understood his value. It was so very easy to love him; his captivating green eyes; good nature; and sense of style. He possessed a sharp wit and told perfectly-timed jokes that would leave permanent marks inside your gut, and because Jonathon was so naturally supportive, he helped unlock strength buried within yourself—it’s just unfortunate that he never saw his own strength and a tragedy that he struggled with opiate dependency while searching for peace only he understood. Though Jonathon’s time with us was short-lived, the impact he’s had is everlasting and the music and art he left behind makes it impossible for the memory of him to ever fade.

The family would like to extend their gratitude to the doctors and nurses in the ICU, everyone who has helped Jonathon in some capacity throughout the years, and to those that have reached out to show their love and support. We are eternally grateful.  It’s also worth mentioning, through the Gift of Life Donor Program, Jonathon helped three people in need.

He was also preceded in death by his grandparents, Claire and John Renaldi Sr.

A post-COVID-19 celebration of life will be planned for Jonny’s birthday at the end of June. Arrangements under the care and direction of the Edward J. Chomko Funeral Home & Cremation Services, West Scranton