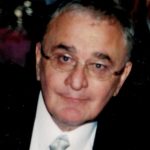 A graveside service will be held on Wednesday at 10 am in the Cathedral Cemetery, Scranton, officiated by the Rev. Richard Fox, Pastor of St. Patrick’s Parish

Joseph James Barbuti passed peacefully at his home surrounded by his loving family on May 9th 2020. Born December 16, 1942, Joe was a lifelong PROUD resident of West Scranton.

Growing up in the Bellevue section of West Scranton, he loved to go to Berschel’s Dairy, pet the horses, get pizza from Brownie’s and play sports at Oxford Park. He loved that section of town so much; he was a proud father when his eldest son, Joseph, bought the family homestead.

He attended West Scranton Junior Senior High School, where he excelled both academically and athletically. He graduated high school in the spring of 1959 at the age of 16.

After high school, Joe attended the University of Scranton on a basketball scholarship where he was named small school all American.  Joe always talked about his game against Providence where he scored 16 points against the great John Thompson while holding Thompson to only 2 points.

He graduated from the University of Scranton at age 20 with a degree in Education. He started his career teaching English at Pocono Catholic High School while renting out a single room in a local family’s house.  After only spending 1 year at Pocono Catholic, Joe’s life’s work and legacy began when he was appointed to teach English at West Scranton Senior High school in 1964. He was a staple in the classroom for 33 years and is most remembered by his students and the influence he had in their lives.  Joe retired from West Scranton in 1996.

Joe was always involved in sports in some fashion throughout his career. Joe was West Scranton High School’s assistant basketball coach from 1966-1972 where he helped lead a very talented team to the state semifinal game where West lost on controversial call. He then became head basketball coach at West from 1972 – 1976. After coaching West Scranton, Joe became a basketball referee for high school basketball and worked the West Scranton track meets as an official. Later, he became assistant coach at Scranton Central High School from 1984-1989 under the late Bob Gilbride.  Joe left that position to become the Athletic Director at West Scranton from 1989 -1991. He also was the voice of the West Scranton Invaders football team. He announced the Friday night football games from the press box at Memorial Stadium.

He was an avid sports fan and knew sports trivia better than most. Joe would receive phone calls from people looking for answers to all types of sports questions. You would find Joe any day of the week in his favorite recliner watching any type of sports on television. He especially enjoyed college basketball, football and MLB. Joe’s favorite sports pastime was putting on his favorite Penn state shirt and watching PSU football games with his family.

He touched the lives of many students, athletes and their families in the community. Joe couldn’t go anywhere without someone recognizing him and coming up to him and talking to him about their fondest high school memory.  Most would tell him how much they enjoyed him as a teacher and would simply say, thank you.

Joe was a devoted and loving Husband to his wife Patricia (Patty) Fricchione Barbuti for almost 46 years and an even better father to his two sons. Joe and Peter.  Joe never asked anyone for anything. He was a very simple man who never put himself first and only wanted to see his family happy and healthy.

Joe truly cherished is two grandchildren, Peter and Payton. Even towards the end of his life, he lit up anytime they would call or visit.  They were the light of his life.

Patty would like to give thanks to her sister, Marie (Merf) Salvatori for all her love, dedication, support and help through this very difficult time. The family would also like thank Dr. Mark Lyons and Allied Services Hospice for their dedicated in-home care, especially Joe’s nurse, Dan Reilly, and all the other aides and staff at Allied. Thank you.

A graveside service will be held on Wednesday at 10 am in the Cathedral Cemetery, Scranton, officiated by the Rev. Richard Fox, Pastor of St. Patrick’s Parish