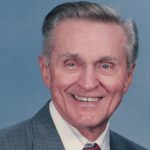 Mass of Christian Burial, Services and Interment will be private due to the current warnings of the Corona Virus (Covid-19).

Joseph J. Rama, 95, formerly of Scranton, died on Saturday, in Catonsville, MD. He is survived by his wife of 72 years, Adeline Gowarty Rama. Born in Scranton, Joe was the son of the late John and Stella Hermanowski Rama. Joe and Adeline were in the first graduating class of West Scranton High School in 1943. Joe served his country in WWII as a Sergeant in the US Army in Normandy, Northern France, Rhineland, Ardennes and Central Europe. He was awarded the European/African, Middle Eastern Campaign Medals with 5 Bronze Battle Stars as well as the WW II Victory and Good Conduct Medals.  Joe was the owner/operator of Rama’s Food Center in Green Ridge, a business he established with his father and managed for 40 years.  He was dedicated to providing the highest quality goods and services to his customers and often spoke of his appreciation for them.  He served on the Board of Directors of Economy Foods for a number of years prior to its merger with Affiliated Foods.  After retiring, Joe and Adeline resided in Clarks Summit for 30 years, where he enjoyed golfing as often as he could.    He was a former member of SS Peter & Paul Roman Catholic Church, West Scranton and attended Our Lady of The Angels Chapel at the Charlestown Retirement Community in Catonsville. Joe had an extraordinary capacity enjoy life, to love and to be loved.   Joe is also survived by one daughter Kathy Tellis and husband Clifford, Baltimore, one son, Joseph Rama and wife Sandra, New Canaan, CT, three grandchildren, Brian, Jessica and Christopher, one great grandson, Callan, nieces, nephews, great nieces and nephews and great-great nieces and nephews. He was also preceded in death by siblings, Edward and Walter Rama, Lorraine Jaust and Lydia Ruby. A Mass of Christian Burial will be celebrated at SS Peter & Paul R. C. Church, West Scranton. Services and interment will be private, due to the current warnings of the Covid-19 outbreak. Arrangements have been entrusted to the direction and care of the Edward J. Chomko Funeral Home & Cremation Services, West Scranton.