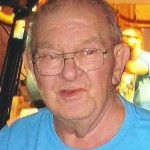 Joseph M. Taylor, 75, of Scott Township, died Thursday evening at Commonwealth Hospice at Scranton Regional Hospital. His wife is Margaret “Peggy” Slawski Taylor, and the couple would have celebrated their 55th wedding anniversary on January 23rd. Born in Scranton, he was the son of the late Joshua and Mary McFadden Taylor. Educated in Scranton schools, he had worked at the Chamberlain Corp., Novick Chemical and was a route delivery driver for the Scranton Times. He also attended Parker Hill Community Church, Dickson City. Also surviving are two daughters, Michelle Weiss, Scranton, Paula Taylor, Williamsport, seven grandchildren to include grandson Justin Taylor who was like a son to Joseph, nieces and nephews. He was also predeceased by one son Joseph and one daughter, Sandra. A Celebration of Life will be on Wednesday, in the Edward J. Chomko Funeral Home & Cremation Services, 262 Railroad Avenue, West Scranton with a Service at 6:30 pm by the Rev Earl Morgan of Parker Hill Community Church. Family and friends will be received on Wednesday, 5 till time of Services. In lieu of flowers memorials can be made to Parker Hill Community Church. Condolences can be left on the funeral home web site.