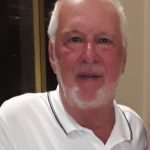 A Memorial Mass of Remembrance will be celebrated and Military Honors accorded at a time and place to be announced, when the present Covid-19 restrictions are lifted.

Joseph Madus Sr., 71, Newton Township, died on Tuesday, April 14, 2020, at Regional Hospital of Scranton. He is survived by his wife Elaine Sydor Madus and the couple would have celebrated their 42nd wedding anniversary in June. Born in West Scranton, he was the son of the late John and Wanda Nieminski Madus. He was a 1966 graduate of West Scranton High School. He enlisted in the Army the following year and served in Vietnam. On returning home, he embarked on a career in auto body repair. He was the owner and operator of Joe Madus Body Shop for over 40 years in Taylor. He was a member of Our Lady of the Snows/Church of St. Benedict.

Joe is also survived by his son, Joseph Madus Jr. and fiancée Jennifer Twist; and his daughter, Ashley Madus, all of Newton; two brothers, John Madus and wife Sandy, Paul Madus and wife Elaine, all of Florida; several nieces, nephews, cousins, brothers-in-law and sisters-in-law. He was also preceded in death by 2 brothers, Bernard and Michael Madus; in-laws, Stefan and Ewanna Sydor; and many close friends.

Joe enjoyed hunting and fishing with his family and friends taking numerous fishing trips to “Priest Lake” in Maniwaki, Canada.  He was a die-hard Dallas Cowboys fan, enjoyed Sunday dinners, a cold beer, and playing the daily lotto at the Schultzville Deli. Joe was a devoted husband and father and the best brother, cousin, uncle, brother-in-law, neighbor, and friend. He will be deeply missed by all.

A Private Graveside Services will be held in Hickory Grove Cemetery, at the convenience of the family, officiated by Msgr. Peter Madus and Msgr. Joseph G Quinn. A Memorial Mass of Rememberance will be celebrated and Military Honors accorded at a time and place to be announced, when the present Covid-19 restrictions are lifted. Arrangements have been entrusted to the care and direction of the Edward J. Chomko Funeral Home & Cremation Services, 262 Railroad Avenue, West Scranton. Condolences may be left on the funeral home website.