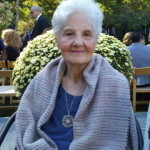 Viewing for family and friends will be on Wednesday 4 to 6 pm.

Rosary Recital will begin at 6 pm, followed by Parastas.

A Divine Liturgy will be celebrated on Thursday at 10:30 am in St. Vladimir Ukrainian Catholic Church by the Rev. Myron Myronyuk, Pastor.

Kathleen L. Izak, was called home to the Lord on Sunday, September 25, 2022. She was preceded in death by her beloved husband, Andrew J. Izak in 2011. Born in the Bellevue section of Scranton on June 27, 1936, she was the daughter of the late James and Catherine Ratchford McHale. After graduating from West Scranton High School, Kathleen was employed by the Heinz store and later retired from F. W. Woolworth Company. She was a devoted member of St. Vladimir Ukrainian Greek Catholic Church, active in its womens guild, serving as president, and assisted in many fundraisers as well as local girl scouting programs. Kathleen was very proud of her Irish heritage and enjoyed keeping the Ukrainian traditions of her husband’s family. She loved to travel, especially to New York City, where as a young girl, she would accompany her father traveling by train from Scranton. She enjoyed many trips with family and friends and was a woman of great faith with strong love of family and will be dearly missed by us all.

A Divine Liturgy will be celebrated on Thursday at 10:30 am in St. Vladimir Ukrainian Catholic Church by the Rev. Myron Myronyuk, Pastor. Interment will follow in St Vladimir Ukrainian Catholic Cemetery, Minooka. Viewing for family and friends will be in the Edward J. Chomko Funeral Home & Cremation Services, 262 Railroad Avenue, West Scranton on Wednesday 4 to 6 pm. Rosary Recital will begin at 6 pm, followed by Parastas. In lieu of flowers, Memorial contributions can be made to St. Vladimir Church, 430 North 7th Avenue, Scranton, PA 18503